Articles written by Dr. Sazawal on Nuclear Energy are catalogued under following groupings:

a. Behind the Deal: An account of the journey in the murky world of Track-II diplomacy that went into the clinching of the US-India Civil Nuclear Deal on July 20, 2007 in Washington — two years and two days after the initial breakthrough in the same city – Published: 22 August 2007

Reports of the announcement in the Indian media:

3. Promoting the U.S. India Civil Nuclear Commerce in the U.S.

a. An article in the India Abroad weekly describing U.S. and Indian official positions on the Indian nuclear liability law, along with author’s personal observations – Published: 5 August 2011

b. Author interviewed by two leading financial dailies (national and international) on the U.S.-India nuclear deal during a visit to Mumbai to present a technical paper at the India-U.S. Nuclear Safety Summit – 29 September 2011

c. A presentation by the author on prospects for the U.S. – India civil nuclear commerce to an expert group of nuclear export specialists in Washington, DC – Published: 28 March 2012

d. A presentation by the author on prospects for the U.S. – India civil nuclear commerce to an expert group of nuclear export specialists in Washington, DC – Published: 21 March 2013

Interview with the Press Trust of India (PTI)

e. A presentation by the author on Challenges in Implementing the U.S. – India Civil Nuclear Agreement to an expert group of U.S. Government officials and industry legal and commercial representatives specializing in nuclear export controls in Washington, DC – Published: 11 February 2014

f. A presentation by the author at the annual symposium of the U.S. Nuclear Infrastructure Council (NIC), a premier consortium of U.S. nuclear suppliers, in Washington, DC. There is a deepening sense in India that western nuclear suppliers are either incapable or unwilling to supply nuclear reactors to the country and hence it is planning to readjust its three-stage civil nuclear program to account for the gap in tens of light water reactors that India had hoped to import in the first stage of their nuclear program – Published: 21 July 2015

g. A Presentation by the author at the School of Advanced International Studies (SAIS) of the Johns Hopkins University, a leading Think Tank in Washington, DC on energizing the U.S.-India nuclear deal to ensure tangible progress in translating the epoch agreement into a commercial success. Informal reports indicate that this presentation has acted as a catalyst in re-energizing commercial discussions between the America based nuclear supplier and the Indian nuclear utility – Published: 24 September 2015

For viewing the SAIS announcement regarding the seminar, please click here

For viewing the agenda of the meeting, please click here

i. Presentation by the author at the 2018 Global Nuclear Energy Markets in Washington, DC organized by the U.S. Nuclear Industry Council (USNIC) – Published: 18 July 2018

For viewing the agenda of the meeting, please click here

a. A presentation by the author at the Vivekananda International Foundation (VIF), a premier Think Tank based in the Diplomatic Enclave of New Delhi and closely associated with prominent policy advisors in and around the new Union Government in New Delhi, to address a contentious issue in the bilateral relationship between India and the U.S., highlighting key differences which have led to an impasse that exists today – Published: 8 August 2014

b. The author prepared a document at the request of foreign policy advisors to the BJP led Government in New Delhi regarding the status of the Indo-U.S. nuclear deal. Specifically, the inquiry was made whether it will be possible for the U.S. nuclear supplier, Westinghouse, and the Indian nuclear utility, NPCIL, to sign a commercial contract for sale of American nuclear reactors to India either prior to or during Prime Minister’s visit to Washington DC on 7-8 June 2016 – Submitted: 18 April 2016

The document was subsequently published and translated by a leading Think Tank in New Delhi (Vivekananda International Foundation) – Published: 24 April 2016

c. The author is invited to give a lecture on nuclear supply chain development in India as the country ramps up its domestic plans to build ten new indigenously designed reactors creating $11 billion (USD) market for goods and services from private sector. These projects have been cleared the Union cabinet and form the nucleus of the “Make in India” program in engineering and construction. The conference was organized by the Asia Nuclear Business Platform based in Singapore. The author serves on its Advisory Committee – Submitted: 9 October 2018

Lecture on Localization and Qualification of Suppliers – 13 November 2019

Lecture No.2 on Challenges Faced by Foreign Suppliers – 14 November 2019

a. Presentation at the National Institute of Technology (NIT), Srinagar: Advances in the Nuclear Fuel Cycle – Published 4 December 2009

b. A presentation by the author on Challenges in Promoting U.S. Civil Nuclear Reactor Exports at the Laboratory for Nuclear Security and Policy, Department of Nuclear Science and Engineering of the Massachusetts Institute of Technology (MIT) in Cambridge, Boston. The paper also includes a section on India – Published: 23 April 2014
Feedback from the Chairman of the Indian Atomic Energy Commission (AEC)

e. A Presentation by the author in Toronto, Canada, at a workshop organized by the Asia Pacific Foundation of Canada (APFC), an institution founded by the Canadian Parliament, on maximizing Canada’s nuclear energy opportunity in Asia. The author contributed to the Panel on India, highlighting West’s inability to properly comprehend India’s exceptionalism, and described progress made by India to ratify the Convention on Supplementary Compensation (CSC) Treaty related to global nuclear liability regime. The presentation concluded with a brief mention of possible commercial opportunities for Canadian nuclear suppliers in India – Published: 2 December 2015

For viewing the APFC announcement regarding the seminar, please click here

a. An exchange with Dr. Baldev Raj, Director of the Indira Gandhi Center for Atomic Reasearch (IGCAR) while donating a historical document on termination of the U.S. breeder reactor program to the IGCAR Library – Published: 12 January 2009

b. Presentation at the University of Kashmir: Progress in Global Nuclear Non-Proliferation and Disarmament – Published 3 December 2009 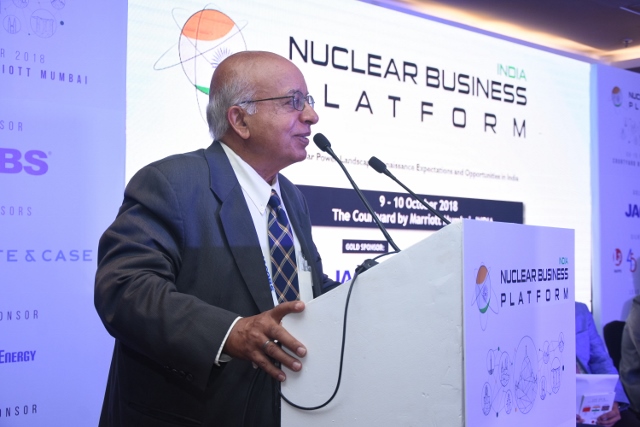